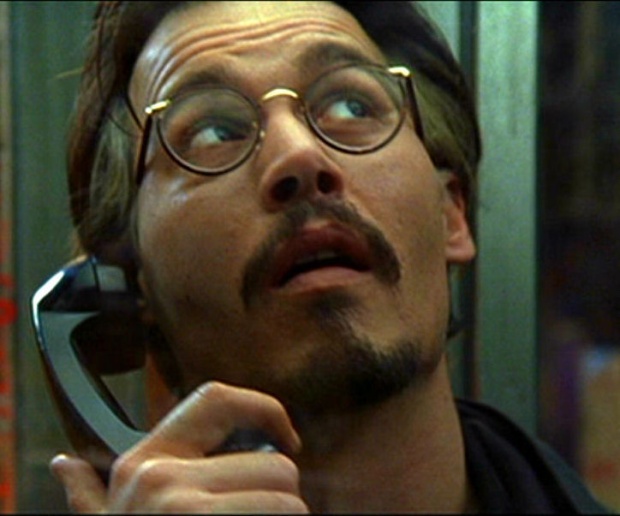 My New Blog…….And actually? My favourite to date. Why? Because it was written under the influence of Jack Daniels. Tomorrow at ‘Gosh knows what time I’ll wake up and still confused by F-Wit hour changes back and forth!’ I always wonder….Am I an hour closer to dying or an hour missed in living a bit longer?’ Very confusing isn’t it? Anyways. My fave blog? It’s coz it’s my latest! I’ve improved. Not storytelling wise. It’s because I can spell without using predictive text. Please spend 10 minutes reading this. It took all of 20 minutes to write it. I reckon …….fair exchange. Less time for you than me.

Right! I’ve been following Johnny Depp and his career in film for the best part of ……well……since he started his career. The photograph above is from the film ‘The Ninth Gate’. I see this photograph as a gentle and genius piece in the movie. The light flickers in the phone box. He looks upwards as if towards God. But the film is about the Devil. Is he seeking God’s help? The person who is on the end of the phone call believes that Lucifer exists. Is Johnny looking upwards because he feels Lucifer is ‘God’? Or is it simply the lights flickering thought processes awaiting the final light bulb moment of ‘I’m in a situation that’s a bit too sinister here?’ My thoughts? No idea. Like many parts of this film it has small iconic moments of ‘Ohhhh……something maybe be suggested or meant there’.

It’s a system of both perceiving failure…. because there is instant judgement of what are considered ‘people’s weaknesses’. And so harsh, quick to point the ‘typed word’ at and criticism or belittling exists. Or that, actually, enterprise does exist in people and therefore, in reality and acknowledging, should be applauded……..a presentation of Breaking Bad versus Snow White.

Evil ? Breaking Bad? No. Not at all. It’s seeking solace amongst the turmoil of catastrophic thinking. The reality of a working day filled with stresses. In my case? Working alongside compromised patients. Who are not patients. They are people. People who share death and the art of dying gracefully and, alongside many emotions and turmoil, with dignity. Or surviving and living with the unlooked for planning of balancing change and hope.

So to explain. Have we all done this? Please agree. Or I’ll feel like Billy No Mates. Days off from this intensity exist and relaxation is sought. Go for a stroll in the countryside? No. No!. I’ll sit and have a fair, fair few and yes, too many ‘phew my God what is it about Jack Daniels that rocks the senses? …..whilst I eat lots and lots of too hot for my palette Thai chilli crisps and 100% intense chocolate ……alongside eating craggy milk and sugar drenched Galaxy or Fruit and Nut cheap 1 ton blocks of heavy for the heart ‘wait and hope it don’t affect the cardiac pump’ chocolate…..and then sit with ever expanding waistline and fluid compromised lower legs whilst watching box sets of instantly forget and thank you very much for wasting hours of my life. But hey! My choice….not yours.

Goodness? Snow White? No to that also. I don’t smile all day with perceived good intentions. When I smile it’s because I recognise the good intentions of others. And that is what we all do. Dodge our inward awkwardness and dread. But we overcome this to present ourselves in a considerate way. If, that is, we have compassion.

Why does the bad always outweigh the good? Who is with the words of weight? Bad just splutters drivel and overloaded in/out the brains ability to capture and retain. Good says a few important words. Shows itself in minimalism and under an umbrella of humility. And it sticks. A day, month, year down the line? Bingo! Yes indeed. I definitely remember that specific nutshell of thought. I carried it with me as an ethical consideration.

And that is what Johnny Depp does. Carry considerations. Humility. Dresses up as his iconic pirate, ‘Jack Sparrow’ and assists others. Uses his simple expression from his heart. Compassion with no seeking of ‘look at me!’ Simply. Doesn’t contact the Daily Mail and say….’This date, I’ll be here, showing off my compassionate nature….or new outfit!’. This is modern iPhone response. The general public videoing and capturing a moment in time that changes their own lives. Johnny? Simply put…..Visits hospitals. Speaks to individuals in the crowds. Shakes hands, hugs, signs autographs. Relaxed and happy in his skin. Well…..he is now. Since the turmoil of the recent poison filled marriage and now, thank God, since divorce he no longer looks haunted and waxy skinned ill and looks back to his fresh faced and smiling and happy old self. But, look further into the way he goes about this generosity of giving to many, by both crowd inclusions and one to one meetings. And what results? I recognise someone as a persona of infinite goodness, a benefactor. Someone who shares that goodness when it really matters to others. And truth. He shows a truthful nature. Truth. Such a word alongside Honest. You don’t buy these qualities. You earn them through endeavour.

Johnny? As said……a humble man, a man who seeks all life has to offer, a well read and insightful man and actually…..all in all…..in reality……a one off genius. And alongside this? The edgier side. The side we all, as human beings. actually have and possess because we are, simply human. Warts and all.

It’s a system of both enterprise and failure.

I will repeat…Truth. Such a word alongside Honest. You don’t buy this quality. You earn it through endeavour. Shallowness and insincerity’s? You can’t dance the dance of working alongside people who are undertaking the art of dying gracefully and with dignity by being insincere. Or surviving and living with the unlooked for planning of balancing massive life change and building new hope. Goodness? No to that also. I don’t smile all day with good intentions. I smile because I recognise the good intentions of others. And that is what we all do. If, that is, we have compassion.

Sincere thought and expression? This ethical description of decent human kind and the way that we think and act? It is simple, ethical, straight forward and to the point. We nod and appreciate. Insincere expression and manipulation that is inherent in self seeking notoriety? It exists where the perpetrators add a million and one additional vindictive or manipulative words until it becomes diarrhoea. Splatters around the toilet pan and so we pull the chain and wash it into the sewers where it belongs. We shake our heads, tut-tut, wonder what the World is coming to, shrug and forget.

Getting back to basics.

In Johnny Depp is a guy who has lived. Living life’s’ challenges……but, I truly believe, doesn’t actually care how it affects him. In other words. Has lived life to the full. And the rest is now a bonus. But, when it comes to others’ problems. He just simply ‘does care’. He is simply a ‘humanist’.

His life is out there, in the media, for all to see. No control, other than that of his own making. He is what he is. And in this arena of millions of onlookers? And, albeit whatever he chose and still chooses, to show, his openness, honesty and ‘this is me’, he gets both fan worship and absolute slaughter. He has an admirable quality. Being essentially ‘Truthful and Honest’.

How many of us have elements of our lives we choose to keep or hide under wraps whilst still having the ability to present the perceived stable persona of our lived majority which is out there and on show? You know the best tactic I use? Be honest. Be truthful. Say what both your strengths and weaknesses are. It’s cathartic.

Me? Drinking at times where you get absolutely bladdered and care free. Switch off the experience the next day and then without a drop partaken for a few days because, in my case, ‘Hey! I’m a nurse and have got a serious job to do’. So my relaxation weekend stops short, I get serious, I get back to reality and I go to work and I look after my patients…..Professionally. My excesses stop. My reality bites and the circus of seriousness continues. I prefer the care free status. But the reality pays our mortgage and helps us eat, stay in the real world and carries us into the next binge.

Same with Johnny. His working philosophy? ‘I’m filming hoped for film/movies of credibility and outstanding quality. I see the same as that which can be also seen in the eyes of many of my colleagues. They and I have spent months/years in developing the hoped for success for a cinematic outstanding masterpiece. I have responsibility ‘for’ and ‘with ‘ people who have invested their lives into successful outcomes. But hey! You know…..I will get deep down drugged, pissed and self indulgent everyday whilst I carry on fulfilling my role as a serious actor. Turn up for work as high as a kite, or staggering giggling and giddy and, in doing this, ruin their and my livelihoods! The livelihoods of hundreds/thousands of people’. OF COURSE NOT! He is a successful professional. A man who has a profound love of all he desires and wants to achieve.

And so………He has drive and energy and focus. His films are works of art. And are loved by millions of people.

Oh you ‘oh so sad’ people. Go away. Please, oh please…..just go far, far away and reflect upon your actions. And hang your heads in shame. But….I doubt you will. You will just continue to snigger……like the sound of hyenas.

And so the story goes, to where? No one knows. But it involves a Volkswagen T2 Crossover Bay Bus called Billie Bud (known to most people as ‘WOW, a camper van’); a Pentax LX SLR camera loaded with black and white film; cooking vegetarian food on a basic set up of Cobb cooker, a couple of gas rings and an open fire; reading books; listening to music and the ruminations from a Staff Nurse. Well......got to fill the hours outside of your nurse job somehow. View all posts by graysummers