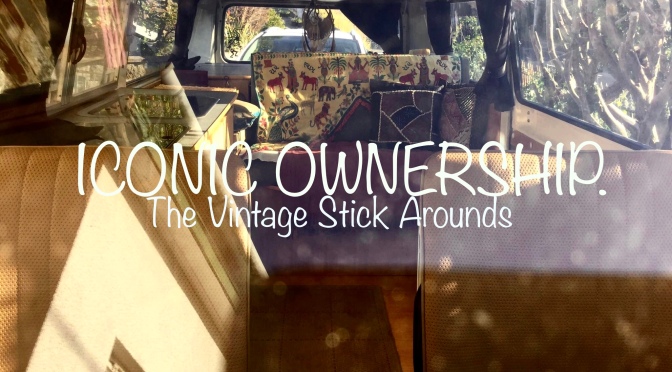 Tools with heavy rust and mud present themselves and all used over the years, by a friend, with fondness. The putty knife with thick hardened putty that had to be Stanley knife beaded off. Spooky stuff! I’d already started on it when I thought ‘Take some photos of this!’ It proves I don’t sit watching Netflix all day.  Since retiring any small project is a project to say thank you for being something to focus upon.

Recycling and not simply throwing out? You throw away money, history, patina, Earth’s resources, quality and a self adventure of learning through processes undertaken. I’m not thinking of this exercise as an insightful learning experience on that last observation. This was a simple cleaning up process. I’m thinking of other experiences.

For example. The VeeDub Bus. After owning her for about five years she went for her MOT. A fail. Well at about 40 plus years old at the time it had problems which were like chasing shadows and moonbeams at times. The fail was responded to by the tester  ‘About time you got rid isn’t it?’ He wasn’t looking for an angle to buy it off me on the cheap. He was being serious. I knew him really well. He was, in his own mind, being realistic. Money thrown at her has been truly upwards in steep curves. A balance of what she provides holistically for well being is always there. Truly an expensive iconic ownership.

Anyways. Balance deliberated on! Still have the VeeDub and took her out yesterday after E5 petrol, enzyme additives to sort out ethanol problems, STP system cleaner and Octane booster all added. About £30 and she went like Billy-O. Exhilarating drive to the seafront. Priceless.

Similar to the tools above. No way did the thought ‘About time you got rid isn’t it?’ entered my brain. Why would it? They felt solid still. A bit of time and effort. Job sorted. Photos here? One trowel is mine. The cleaner one on the right. Because I am more assiduous? Nope. Just don’t use it often. Or clean it obviously. The others were rescued from a dark corner in a little shed and were given to me. So, wire brush, wire wool, emery cloth wet and dry and that’s cleaned enough. The finish. To black Hammerite paint? Nah! To me it is all about Patina. It’s history as a tool. You can’t paint history out. Yes, I know it protects the tool more. But a good clean after use in the garden and dried effectively is ok. Now they sit in the shed alongside others.

Tap on photographs to enlarge.

6 thoughts on “Cleaning up to Recycle. Years left in them yet!”

Where Summers finds Black and White joy in life.

This month is now 25 days old. So far? Much. Recently purchased a jar of cheap instant coffee and two bags of washing soda. Today will look for Vitamin C powder on the Internet. Then hopefully, in the next few weeks, develop some old black and white film negatives with these alternative natural items. I…

Jinhao X159 fountain pen. Bought after reading about them, searching for and finding an internet blog. And it was a Wordpress blog too. Well worth a read. Link below. Never usually buy a new pen at all. But the price, the size and the written piece above made me want to give it a try.…

Motion Blur Imagery. But not in black and white.

Using film in the Pentax LX SLR Camera, it was a deliberate intention at times to create ‘Motion Blur’. There were a few of us on Flickr that were fans. We used to get catches of ethereal light mixed in synergy with the surrounding dark presences. They were very much eerie and very mystical catches. …

The Dune Fascination. A way of life.

Where Summers finds Black and White joy in life.